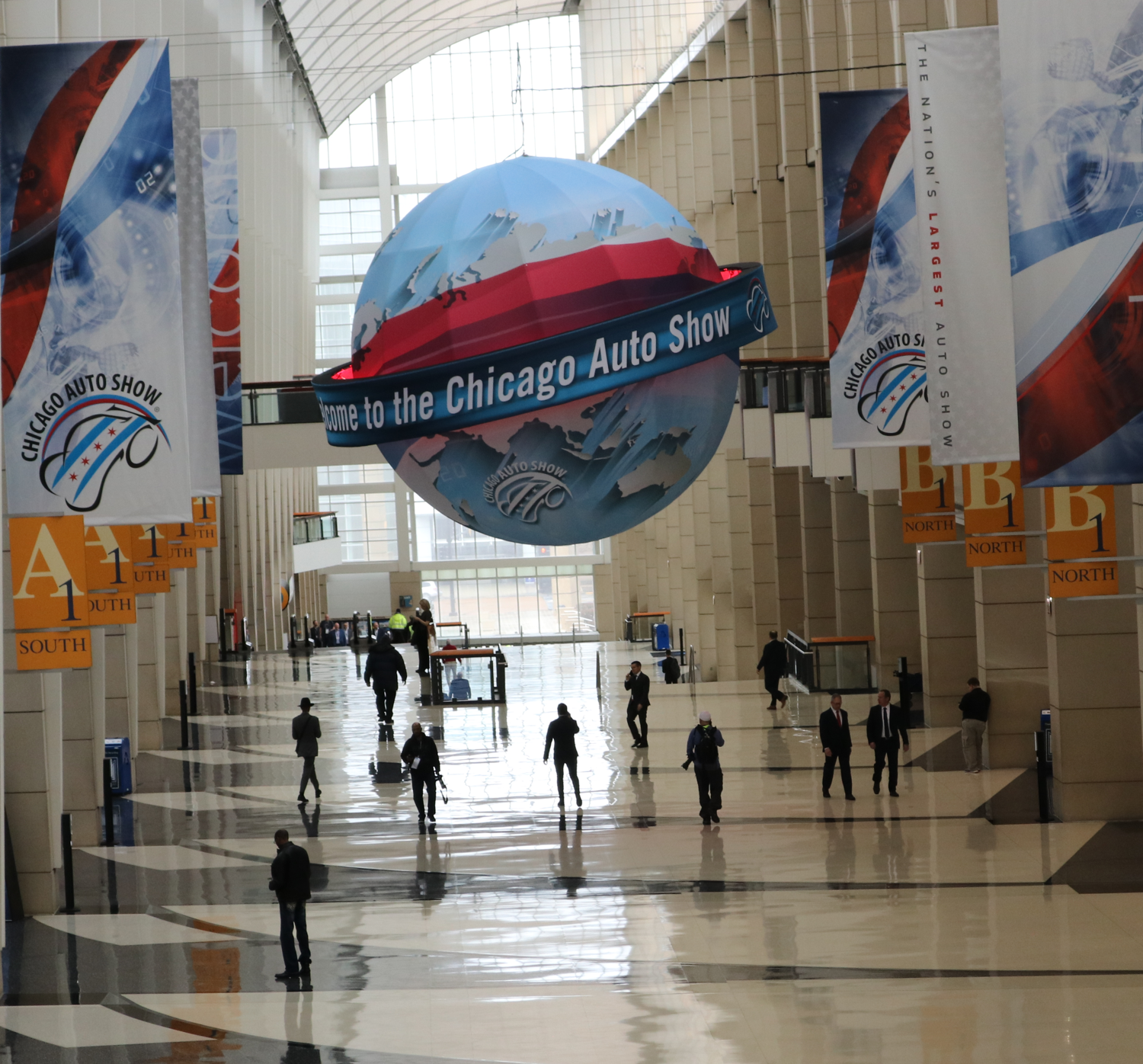 Chicago is proud of boasting that it hosts the largest car show in the United States. This is true in two parts: pure size of the area (over 1,000,000 square feet); and the number of vehicles displayed (almost 1000). However, New York (coming up in April), Detroit (last month) and Los Angeles (November) are probably more important in the number and importance of new vehicle premieres. But Chicago isn't left out, hosting many new vehicles, mostly trucks.

Lego Silverado... your argument is invalid, unless you drive it in Minecraft.

The 2019 F-150 saw a mid-cycle refresh. The F-Super Duty gets its turn now, with new grilles, bumpers, lights and tailgates. Under the hood, a new, huuuuge optional 7.3-liter V8 gasloine engine or a redesigned 6.7-liter Powerstroke Diesel will be more powerful than previous engines. A 10-speed automatic replaces the previous 6-speed. Neither engine is rated for power, yet; we'll have to see if they can squeeze more than 1000 pound-feet out of the Power Stroke to beat cross-town rival Ram.

The 2020 F-Super Duty will now offer the Pro Trailer Backup Assist, a system to use camera and knob to easily backup the truck to align with a trailer hitch. This system and the simpler Trailer Reverse Guidance are both now compatible with fifth-wheel and gooseneck trailers.

The F-Super Duty will now also offer Automatic Emergency Braking, a first, in addition to collision warning and it will be standard on XLT and above.

The 2020 Sierra HD saw the light of day a few days before the show, but the CAS is its first major public appearance. These trucks mimic the business-like styling of the 1500 models but with more toughness. Overall the truck is larger and offers more capability.

A ten-speed automatic replaces the 6-speed for the Duramax Diesel engine option. Towing increases to a maximum of 35,500 pounds!

The GMC-exclusive Multi-Pro tailgate is available on the new Sierra HD and is offered regardless of trim or body.

An available heads-up system projects vehicle speed, navigation diresctions and even road grade onto the windshield.

After the lackluster reviews of the redesigned 2019 Silverado's appearance, Chevrolet must have taken note. The 2020 Chevrolet Silverado HD has a sharper style, much easier to distinguish. It shouldn't be confused with a 2019 Silverado HD or a GMC Sierra of any year or stripe.

Chevy also decided to swing for the bleachers in the capability column, maximum towing for the new Silverado HD is 35,500 pounds over 6 tons more than a 2019! Also 500 pounds more than the F-450 Regular Cab, a truck with which the Silverado doesn't directly compete. A new, larger 6.6 gasoline engine has 41 more horsepower and 22% more torque than the old 6.0-liter. The Durmax Diesel gets a new 10-speed automatic. Even the cargo boxes have grown by about 14% in volume. The rolled-steel beds aren't shared with the light-duty Silverado.

The truck itself sits on a new frame: the wheelbase is over five inches longer on Crew Cab models.

New technologies include an optional heads-up display that projects truck speed, navigation directions and other pertinent information directly in front of the driver's line of sight and a power tailgate that raises and lowers at the touch of a button.

Refreshed for 2020, the Tacoma has a new grille, taillights, LED headlights (some models) and some new wheel designs. The audio system is upgraded, including Apple CarPlay, Android Auto and Alexa compatibility. 7 to 8-inch touch screens are standard

The TRD Pro version offers upgrades, including a Panoramic View Monitor, which can help when traversing difficult trails. The Fox shocks are retuned as are the springs and the wheels are new and lighter.

Smart Key, previously available for hands-free locking and unlocking of the driver's door, now works on the front passenger door, too.

Now comes the Ram Multifunction Tailgate (all the cool names were taken), a regular tailgate with a 2000-pound capacity that also opens sideways in a 60-40 split to allow easier access to the bed even when hooked up to a trailer. It also includes an under-bed retracting step. It can be combined with Ram's lockable Ram Box storage system.

For 2020 the Rogue Sport is refined and refreshed, further differentiating it from the regular "Rogue." An entirely new front treatment, includes grille, fascia, hood, bumper and headlights. Apple CarPlay and Android Auto are included in the improved infotainment system.

Nissan introduced the outdoorsy, but no more off-road capable, Rock Creek Edition of the Pathfinder. Available in front-wheel or all-wheel drive (which is a hint), it has unique dark wheels, black mesh grillesblack fender arch treatments, black roof rails and door handles among other decor.

Cars were big at the Chicago Auto Show, including this humungous Caddy, a 1959 Eldorado Biarritz.

This 1968 Shelby Mustang was known as the King of th Road or 500KR and had a 428 cubic inch Cobra Jet V8 and a three-speed automatic. We got to drive it down in the Concept/Technology Garage. You can't.

The Legacy is redesigned for 2020. The turbocharged 4-cylinder is back. Replacing the flat 6-cylinder engine, the 2.4-liter turbo borrowed from the Subaru Ascent, has more horsepower (260) and a lot more torque (277 pound-feet). The standard 2.4-liter non-turbo gains direct fuel injection, 7 horsepower and 2 pound-feet more torque (182/176 respectively). The suspension is also revised for improved handling.

A new Distraction Mitigation System becomes available, standard on XT and optional on Limited. Also new is a Front View Monitor which can help wth parking or in blind intersections.

Only 100 will be made of this Vibrant Yellow special edition. Unique interior colors, 21-inch wheels and an inscription on the carbon fiber door sills round out this 100-of-a-kind model.

When VW re-did the Jetta for 2019, the hot-rod GLI was missing. It's replacement was shown at the CAS, with a more powerful 228-horsepower 2.0-liter turbo, a six-speed manual or 7-speed dual-clutch automatic and 18-inch wheels. Adaptive shock absorbers that can go from smooth and comfortable to sharp and responsive are optional.

The next-generation Ford Explorer brings with it the next-generation police interceptor. With the Taurus going awaay, the Explorer will be the backbone of the Ford police fleet. The new Explorer is returning to rear-wheel drive, which cops like, and it will offer a hybrid system for excellent fuel mileage.

Long-time Car and Driver editor Csaba Csere was at the party to celebrate the 30th anniversary of the Acura NSX prototype, which also took place at the Chicago Auto Show in 1989.

Chrysler invented the minivan in the 1984 model year. A 35th anniversary version is available in both the Chrysler Pacifica (right background) and Dodge Grand Caravan (not shown. No really, that's an 84) for the 2019 model year.

Chrysler needs a minivan to pull all of its awards for their minivans. (These are just the ones for the latest version.)

The Miata was originally shown at the Chicago Auto Show 30 years ago. Here to celebrate the 30th anniversary are father of the Miata Bob Hall, the original designer, Tom Matano and the designer of the latest version, Masashi Nakayama and his translator. 500 30th Anniversary Special Editions will be sold in the United States.

UPDATE: All 500 30th anniversary editions are already sold. In fact it took only 4 hours after the announcement.