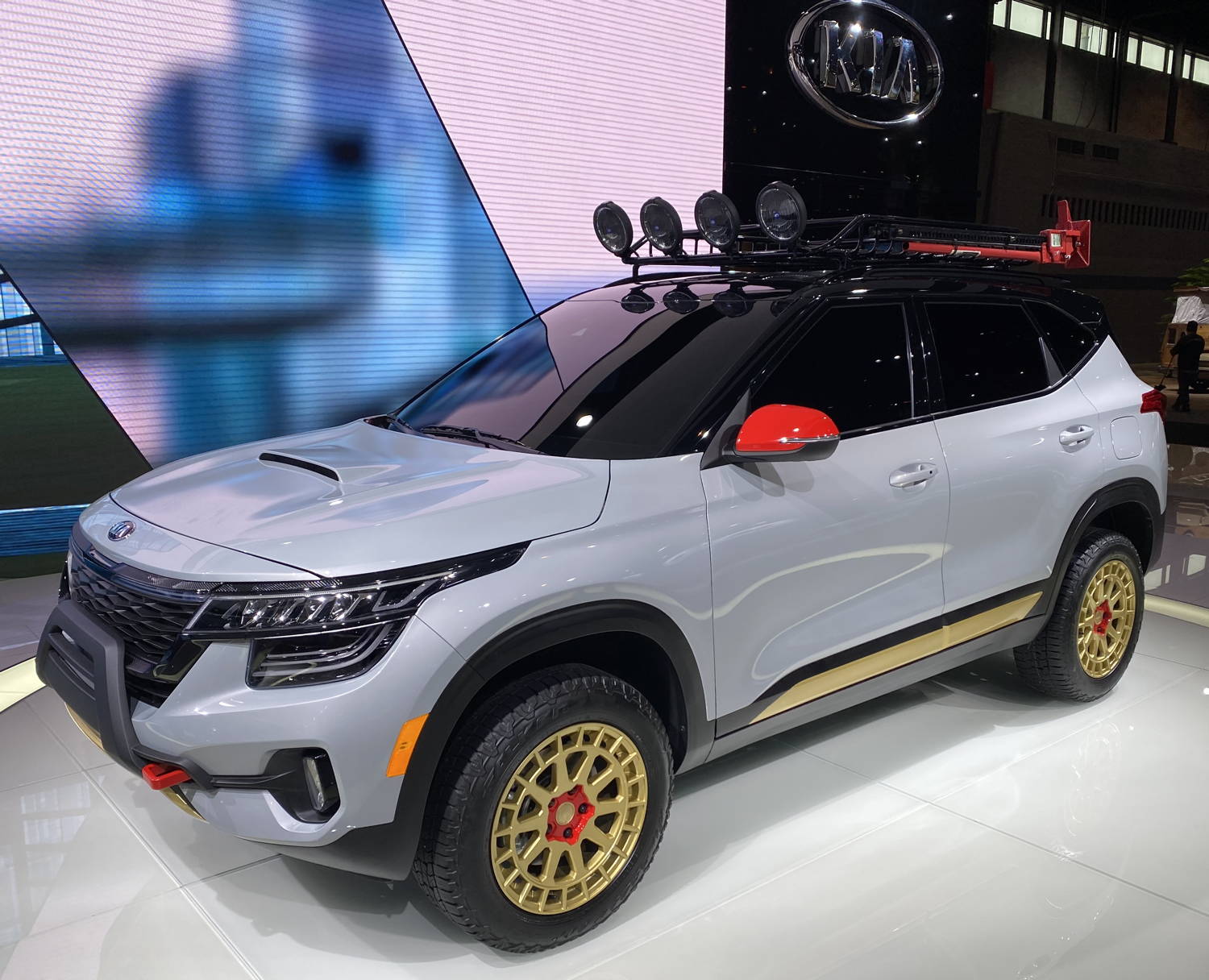 A thorough refresh for 2020 brings a beautiful new grille, a new hood, standard LED headlights, redesigned rear bumper, redesigned taillights and redesigned wheels. On the inside the instrument panel is completely new, the radio controls are now above the climate controls. Overall length increases by one inch.

Blind Spot View Monitor is new, and standard on Limited. It projects a view of the appropriate side of the vehicle when the turn signal is actiavted to help show what is in the driver's blind spots.

The previous entry level Premium is discontinued, leaving the Cadenza Technology as the base and the Limited as the second and top level. Many features previously standard on Cadenza Technology are now only available on Limited, including ventilated front seats, power tilt and telescoping steering wheel, heated steering wheel and memory driver's seat, wheel and mirrors.

The power rear sunshade and heads-up display are no longer available.

All-new for 2019, the Forte now gets its hot-rod cred with the GT and a 1.6-liter turbocharged 4-cylinder cranking out 201 horsepower. The Forte GT replaces the solid rear twist-axle for a full multi-link independent set-up to make handling more racy. Finally, front brake discs are 1-inch larger than more mundane Fortes.

Want the cred without the actual zoom? GT Line has the looks but packs the regular 147-horsepower 2.0-liter and pretty much replaces the Forte S.

LED headlights are no longer offered on other Forte models; they are standard on GT. GT Line and GT get heated outside mirrors with turn signal repeaters, same as EX.

The Adaptive Cruise Control can now change speeds based on speed limits on U.S. Interstates. The Surround View Monitor display is improved. "AWD" baddge is moved to the trunk lid.

A mild refresh brings new headlights, grille and wheels. New chevron-patterned LED daytime running lights will help accent the changes and make the Niro more unmistakeable at night. Inside the dashboard's 7-inch cluster is redesigned. Now optional paddles on the steering wheel can enact aggressive brake regeneration in order to slow down entirely without using the brake.

Wireless phone charging is now available, standard on EX and SX. The Premium Package available on Optima EX becomes its own model: Optima EX Premium. Pedestrian Detection is added to the standard Autonomous Emergency Braking on all trims (previously just on EX and SX).

Limited package on SX is cancelled, taking with it the availability of a Surround View Monitor, heated rear seats and rear window shades.

Automatic high beams are now standard on all models.

UVO telematics are now offered, standard on EX and above, it can call 911 through your cellphone if the aribags deploy. Other remote features are available through the system.

Lane Departure Warning, Lane Keeping Assist, Smart Cruise Control, forward collision warning and automatic braking are now standard. UVO telematics are standard, it can call 911 through your cellphone if the aribags deploy. Other remote features are available through the system.

Apple CarPlay and Android Auto are now standard on all models.

The Sorento gets a refresh to help it stand alongside its new big brother, the Telluride. New bumpers, headlights, fog lights and taillights bring a new look to the Sorento. The foglights on EX and SX are the biggest change: from four LED lights on each side to a single round projector LED on each side. This is the second consecutive year the Sorento has gotten a face-lift.

The LX V6 model is replaced by the S V6, including content from the LX Convenience package.

The Soul gets a very serious update for 2020, with a 1.2-inch longer wheelbase and an overall length up by 2.2 inches. In the engine bay, the 1.6-liter base engine is retired, replaced with a new 2.0-liter, high efficiency engine. The 1.6-liter turbo engine is still available. A 6-speed manual is still offered on the base Soul LX with the 2.0-liter engine. With the 2.0-liter the 6-speed automatic is gone, replaced by a continuously variable transmission. The 1.6 turbo is still backed up by a 7-speed dual-clutch sequential transmission. Fuel mileage is up across the baord.

The new trim levels include the first hint that Kia thinks of the Soul as competing with SUVs: the X-Line is a mid-level trim that includes aggressive sill mouldings and wheel-arch flairs in gray.

On the outside, new low-profile headlights make a big difference. The new taillights start horizontally in the liftgate, then straight up the C-pillar and then straight across the roof, integrating the third rear brakelight (CHMSL) into the design.

New front and rear fascias and bumpers spruce up this SUV mid-way into its life cycle. New headlights, fog lights and wheel designs are also introduced in the front and new oval exhaust tips are added to the rear.

A new "S" trim level nestles between the base "LX" and the "EX." All variants now get the larger 8-inch touch screen for the radio and infotainment functions as the 7-inch version is discontinued. A wireless charging tray for Qi compatible phones is now optional on S and EX, standard on SX Turbo. Satellite radio is no longer standard and isn't availabe on LX.

The engines stay the same, though fuel mileage improves slightly on most models.

Driver Attention Warning is a new, stadnard feature, which monitors driver attention and sounds an alert when the driver might be drowsy or distracted. High Beam Assist is now standard across the board, a system that can dim the high beams for approaching cars. Lane departure warning is now standard, and upgraded to Lane Keeping Assist, a system that helps keep the Sportage centered in the lane. Smart Cruise Control is now offered, standard on SX Turbo and optional on S and EX, it can bring the Sportage completely to a stop in heavy traffic. Another system that is upgraded and made standard, Autonomous Emergency Braking now includes pedestrian detection. Blind Spot Warning with Rear Cross Traffic Alert is now available on all models, including LX; it's standard on S, EX and SX Turbo.

Heated and power-folding outside mirrors are now available all the way down to the LX, standard on S, EX and SX Turbo. The power Smart Liftgate that opens automatically if you wait near the back with the keys in your pocket is now standard on EX; still standard on SX Turbo. The SX Turbo's new LED headlights no longer come with adaptive turning beams that the older high-intensity discharge lights offered. Leather is no longer standard on EX, but optional with the 8-way power front passenger seat.

The 2.0L, previously two trim levels, Stinger and Stinger Premium, is just one, now referred to as "GT-Line," sure to cause confusion with V6 models, which are called "GT." The GT-Line takes on design features of the GT, such as wheels, grille, bumpers and black chrome trim. All models get new wireless chargers for compatible phones.

The last Kia that fit this niche was the one-year, doomed Borrego. The Sorento has been Kia's largest vehicle, offering three-rows (though not for full-size adults) and seven passenger capacity. The Telluride promises to rectify all of that. Eight passenger, adult capacity is standard, with a full three-across thrid row and 1.8-inmches more headroom in that spot than the Sorento. Overall the Telluride has 24 cubic feet more passenger space than the Sorento.

In the engine bay, a 3.8-liter V6, Kia's largest, produces 291 horsepower and 262 pound-feet of torque. An 8-speed automatic and front or all-wheel drive transfer power to the ground.