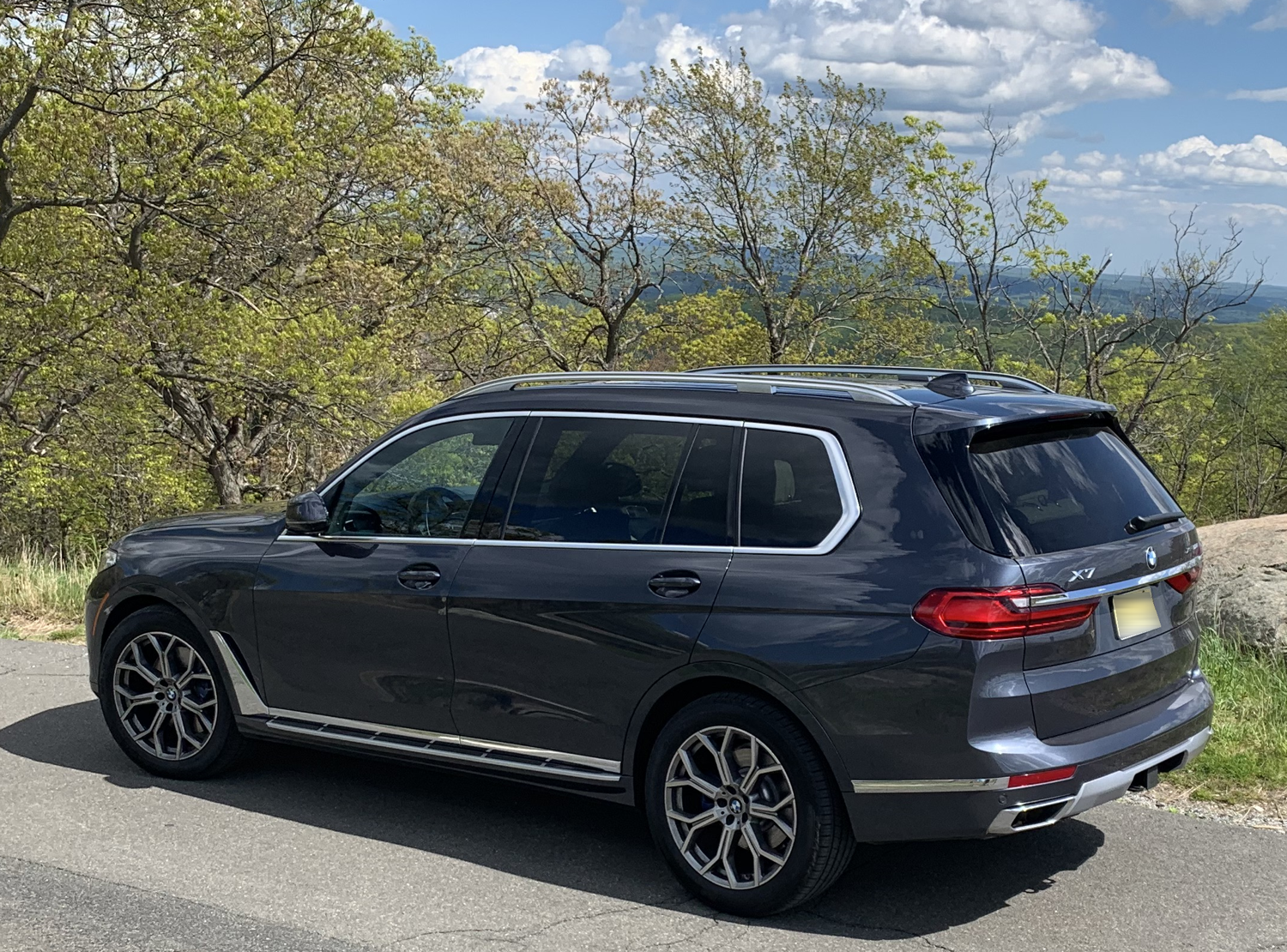 I'm buckling into BMW's latest sport utility, the X7. The starter button I press is crystal. The shifter I pull back to engage "Drive" is also crystal. Optional massaging seats are available for me and the passenger next to me. Behind me and next to me are six more seats of comfortable, sumptuous leather. All seven seats are capable of warming your buns with available heated seats; the front heated seats are standard. Only the fronts also offer ventilation for the seat cushions, a valuable addition for Summer. In addition, the second and third row each have their own climate controls with separate temperature and fan controls; vents are in the B-pillars and center console for the second row and in the ceiling for the third. The second row reclines and has a center armrest; the third row doesn't offer either of those amenities. Still, with 33.3 inches of legroom and 37 inches of head room, third row passengers are not cramped in the least. Those numbers are 4.1 and 1.1 inches larger than the Audi Q7, respectively.

A mountain road in a New York State Park is not an ideal playground for a 5617 pound mommy-mover, but this BMW takes to it well enough. The 456-horsepower twin-turbocharged V8 does a good job, even up on this steep mountain road, but this isn't a race-car. If you are going to use it to carry multiple adults and their luggage up mountains and tow, I would steer clear of the xDrive40i 6-cylinder model. Empty, it pulls very strongly. If you really must race Durango SRT's, this Fall the 2020 X7 M50i will offer 523-horsepower and 553 pound-feet of torque. The eight-speed automatic is very smooth but quick to shift. Paddle shifters are standard and the transmission responds very quickly to their commands. Towing is 7500 pounds, regardless of engine choice.

As you would expect, the X7 offers a swath of electronic safety and driving aids. As you would also expect, some of these are annoying and possibly dangerous. As car-makers try to rush fully autonomous driving, they test the features one-by-one on their customers. This X7 xDrive50i had BMW's Active Protection System, which detects an imminent crash and tightens the front seatbelts. This system lets you know it's working by tugging on the belt shortly after you put it on. It had post crash braking, a system that applies the brakes after a collision to prevent subsequent crashes. A Fatigue and Focus Alert monitors the driver for signs of tiredness and sets off an alarm. BMW Assist eCall automatically calls emergency services if a crash is detected or you press the SOS button in the ceiling. Blind spot warning and rear cross traffic warning are standard as are Park Distance Control (front and rear parking sonar) and a backup camera. A full surround-view camera and an automatic parking assistant are available.

Frontal Collision Warning with City Collision Mitigation will sound an alarm if you are approaching an obstacle too quickly; it will stomp on the brakes if you fail to act. I have found that this feature goes off unexpectedly during close maneuvers, and it could startle a driver and cause a mistake. In general, I think it's a mixed bag that could possibly lull a driver into a false sense of security or interfere with a driver performing an evasive maneuver. If it is more closely linked to the Focus Alert it might be more valuable. The Insurance Institute for highway Safety believes it reduces crashes, so statistically it may be a plus.

The Lane Departure Warning and Lane Keeping Assistant (standard on xDrive50i, optional on xDrive40i) was the most dubious. Since the early aughts these systems have been annoying people (especially in New Orleans where turn signals are a sign of weakness). The BMW version doesn't have an audible component, thank you very much. Instead it vibrates the steering wheel. That is on the standard Lane Departure Warning. With the available Lane Keeping Assistant, it also pulls you back towards your lane if you left without using the turn signals. Imagine my surprise when, with cyclists in my lane unexpectedly, I steered around them and the BMW tried to pull me back over the lane divider. BMW makes bicycles, so maybe its a money thing: smash some bikes, sell more replacement bikes. This type of feature in theory could be quite a safety boon, but it needs more integration with other systems and much more artificial intelligence before it becomes more than an annoyance or a danger. Luckily, it can be turned off.

The X7 offers a decent number of variants and options. Choose from the xDrive40i with its 335-horsepower 6-cylinder or the xDrive 50i V8. Choose Luxury or M Sport design variants (the M Sport doesn't affect performance, just the looks). 21 or 22-inch wheels are offered. A Dynamic Handling Package partially delivers on what the M Sport design promises, with larger brakes, more direct steering and a system that actually looks down the road and stiffens the shocks when it sees a curve ahead. The Driving Assistance Professional Package offers the aforementioned Lane Keeping Assistant, Active Cruise Control with Stop & Go, and other electronic aids.

Such luxuries as heated and cooled front cupholders, remote engine start, soft-close automatic doors and rear window power sunshades are all offered. Please save yourself $400 if you buy the X7; the aluminum running boards only impede entry and exit and they don't really add anything to the appearance, either. Their purported use is to access the roof more easily. Just use a step stool.

If you want quiet, luxurious comfort and space for six to 7 people and the ability to tow a pretty good sized trailer, BMW has something to offer, finally and its pretty respectable. BMW has handled the transition from Ultimate Driving Machine to Ultimate Luxury People Mover very well, indeed.