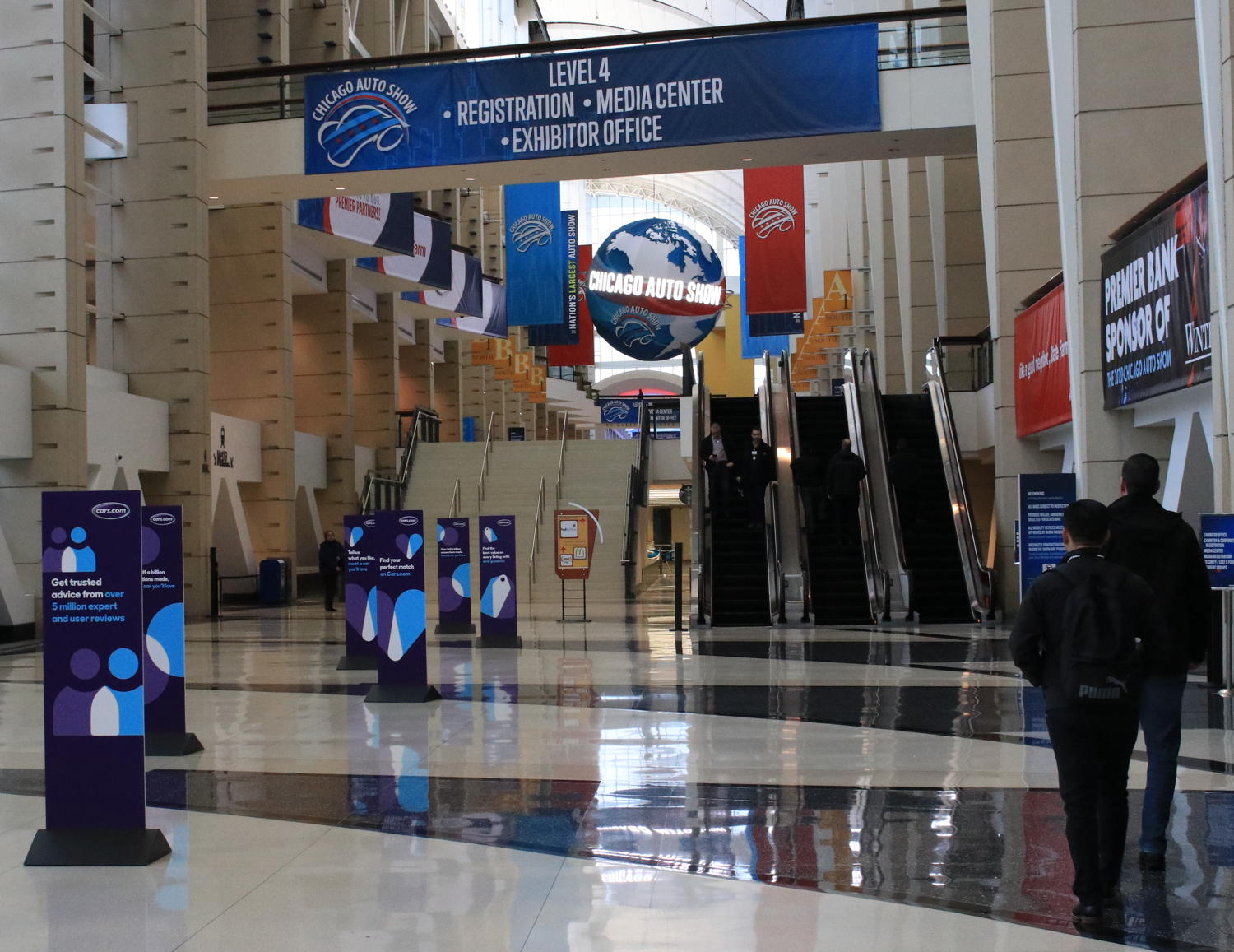 When we attended the 2020 Chicago Auto Show it wasn't obvious that the last new car auto show was taking place. It should have been: car shows have been on the decline for years, decades really.

Car shows have been around almost since automobiles were first built. In 1900 in New York City 31 automobiles were displayed for the public in Madison Square Garden; admission was 50¢. In 1901 the Chicago Auto Show had an indoor test track to provide demonstration drives of ten different models, including electric, steam and gasoline powered. 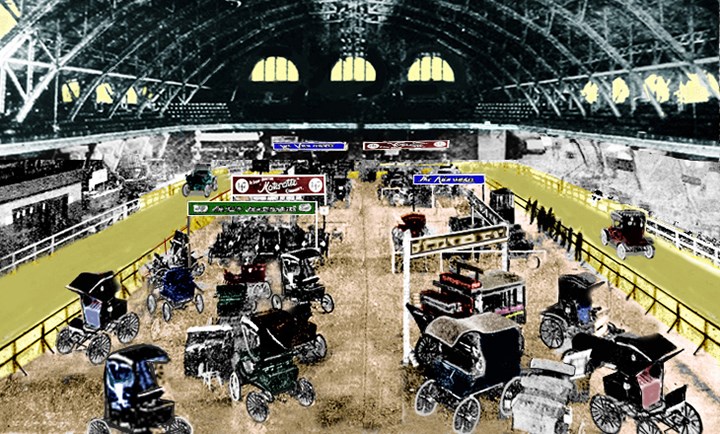 Now a virulent pandemic has all competent experts agreeing that any gathering of ten or more is extremely dangerous and the concept of packing a convention center with thousands of people is unthinkable and will be for years. As suddenly as car shows have ended, probably for good, they were already on there way out.

As early as the 1990's , smaller regional auto shows began to lose the support of many of the major manufacturers. For example, in 1995, the New Orleans International Auto Show had no presence from Ford, BMW, or Nissan. Smaller local car shows in recent years have had no manufacturer support, relying only on local dealerships to supply the vehicles. More than half of the 2020 Saint Louis Auto Show was populated by RV's, motorcycles and classic cars brought by local car clubs.

A 1967 Cosmo Sport 110 was given a prominent place on the Mazda stand. This was one of the first cars ever to have a rotary engine, in this case a two-rotor with 110 horsepower.

Car clubs have been welcome additions at car shows for as long as they've been around. As manufacturers and even later, dealers, abandon them, car clubs will still be participating and managing car shows. This 1965 Shelby Cobra resto-mod (modern supercharged V8 and 5-speed) and these Mustangs from 1964 to the modern day were all provided by a local club.

This George Barris custom has hand-built Goodyear tires that can light up in different colors. A TV, car-phone and a full cocktail bar round out the accoutrements.

This one looks like a custom, but remarkably, this came straight from General Motors. Hand-built, this model was the absolute peak of luxury. At $13,074, it cost more than a Rolls-Royce.

Companies like Rolls-Royce, Bentley, Lotus, Lamborghini, Ferrari and McLaren have not seen a financial reason to invest in car shows in many years. However, that doesn't mean that these cars are unavailable at those venues. Sponsored by a bank and with vehicles supplied from local dealerships, most shows have an area comprised of the rarified likes of vehicles that start at six figures and up.

Larger than life, this extended wheelbase version of the Phantom is the pinnacle of the Rolls-Royce line and comes with a twin-turbocharged V12.

This is the new, "softer" McLaren. McLare, a British sports car company, specializes in mid-engined crazy hypercars. This one "only" has 620 horsepower.

This one has 710 horsepower.

Lotus is another small British car maker. The Evora is their only present U.S. model and for 2020 it gets more horsepower (416) and a new name: Evora GT.

What would a car show be without the latest iteration of the Ford GT? This one is decked out in fully visible carbon fiber.

Who cares if this car is in dealerships and has been seen at car shows for over a year: its a mid-engined Corvette! Despite being "old news" it was difficult getting a picture even on press days as people were continually crowding around it.

The DBS is still the quintissential Aston Martin. This Superleggera has a 715-horsepower twin-turbocharged V12. The EPA fuel mileage is rated at 14 city and 22 highway. Not bad, really.

The newest semi-luxury Kia came out at the Chicago Show. Above it is the K900, refreshed last year.

The hybrid version of Hyundai's new Sonata came out, and its fuel mileage is spectacular: 50 city and 54 highway on the Sonata Hybrid Blue.

The Atlas is pretty new (introduced as a 2018 model) so its first refresh is somewhat minor. Mechanically, the turbo 4-cylinder is now also offered as an all-wheel drive model, along with the turbo front-wheel drive and V6 models. The changes are mostly cosmetic, mostly made to synchronize the three-row Atlas' looks with the new Atlas Cross Sport.

Unlike the TRD Pro models, Toyota's upcoming Trail Edition models of the Tundra, Tacoma and 4Runner are aimed at people enjoying outdoor activities instead of zooming through the outdoors at high speeds. On both the Tacoma and Tundra the package includes lockable bed storage (similar to Ram's Rambox) that can double as a cooler.

Toyota is known for hybrids, but not so much for plug-in hybrids. The Rav4 was completely redesigned for the 2019 model year and a hybrid version cam along for the first time. For 2021 the Rav4 Prime will be the most powerful Rav4 ever, with 304 combined horsepower and a manufacturer's estimated 5.8 second zero to 60 MPH time. The "Prime" in the name means you can plug in and drive 39 miles on electricity alone. Afterwards, the Rav4 Prime should achieve similar gas mileage to the Rav4 Hybrid, about 40 MPG.

After a full redesign for 2020, this additional trim is making a late entry. The XSE is the sporty version of the popular crossover. In additional to lots of black trim, a bigger grille and more aggressive features the XSE gets a tighter suspension and a sportier steering rack. The engine, transmission and brakes are all the same as other Highlander models.

The Kia Seltos is a new entry-level sport utility. It was first shown at the LA Auto Show, and now at the Chicago its back as it prepares to enter showrooms.

The F-Type gets a comprehensive refresh with more aggressive headlights and a larger grille. The F-Type R gets the 575 horsepower engine from last year's SVR.

The GM full-size sport utilities are redesigned for 2021. The biggest two changes: an independent rear suspension adds cargo space and improves the ride and handling; a 3.0-liter diesel six-cylinder is a new option. This is the long version of the Yukon, which will no longer have an "XL" on the badge, leaving you to identify it by its longer rear window.

The AT4 off-road version is new to the Yukon. Introduced in 2019 on the new Sierra, the AT4 will give trail cred to the new Yukon. Note the rear window: this is the short version.

Genesis was missing a sport utility, a major gap, and some expected them to rebadge the new FWD Hyundai Palisade. Instead, Genesis developed a rear-drive platform for the new GV80. Loosely based on the new G80, the GV80 will offer two new engines: a 2.5-liter turbocharged 4-cylinder or a 3.5-liter turbocharged V6.

Honda took a while updating the meanest Civic ever. Disappointing to some of us, it doesn't look any less like a 17-year-old boy got a hold of his father's wallet and his uncle's welding rig. Changes do include brake rotors and pads that will reduce fading on the race track and steering and suspension tweaks to improve response and handling. That kid still has his father's platinum MasterCard: artificial engine noises have been piped in through the stereo; don't you wish kids stuck to putting baseball cards in the spokes? The grille is bigger (OH MY I AM SUPRISED) and this gorgeous blue paint is now available. The 2020 Type R gains all of the safety nannies that had been mercifully missing before: adaptive cruise (alright), collision mitigating braking system (crap, another button I have to hit every time I start the car), Forward Collision Warning (more beeps I have to ignore), Lane Keeping Assist System (cool, my car can give me an alibi for running over cyclists), road departure mitigation and lane departure warning (I don't like these, I just got tired of typing parenthesis).

Years after the Challenger got the "widebody" treatment, its offered on Chargers with the hellcat motor or the 6.4-liter V8.

The 2021 Pacifica constitutes a minor refresh cosmetically, but mechanically, all-wheel drive becomes an option for the first time on a Chrysler minivan since 2004. Sure, the previous Pacifica offered it, but that was a crossover... okay, this story gets confusing. Anyway, the real news is that the all-wheel drive is mechanical, not electric, so it will not be offered on the Pacifica Hybrid. Also, it will not eliminate the famously handy stow-and-go seating! Middle and rear seats still fit into the floor, making us wonder if FCA engineers were able to sneak up behind a man coming out of a British police call box and over power him and... well never mind how they did it, its fantastic, only the mini spare is sacrificed.

In addition to the mechanical bits, a new top-level "Pinnacle" model will come with custom throw pillows. Bets on whether those will dissapear faster than change left on daddy's dresser?

A sportier alternative to the tiny Chevy Trax, the Trailblazer is a Buick Encore GX in drag. (After all the Trax is a regular Encore in drag.) With 1.2 or 1.3-liter turbocharged 3-cylinder engines, front-wheel drive and a CVT transmission, all-wheel drive is offered with the larger engine and a 9-speed automatic replaces the CVT. The trend of two-tone paint floating roofs continues.

The Exquinox gets a refresh for 2021, including this neat RS model. Lane-Keeping Assist, Lane Departure Warning, Automatic Emergency Braking and Automatic High Beams are all standard for 2021.

All of the full-size GM SUVs get a complete redesign, including independent rear suspension and an optional inline 6-cylinder turbo diesel.