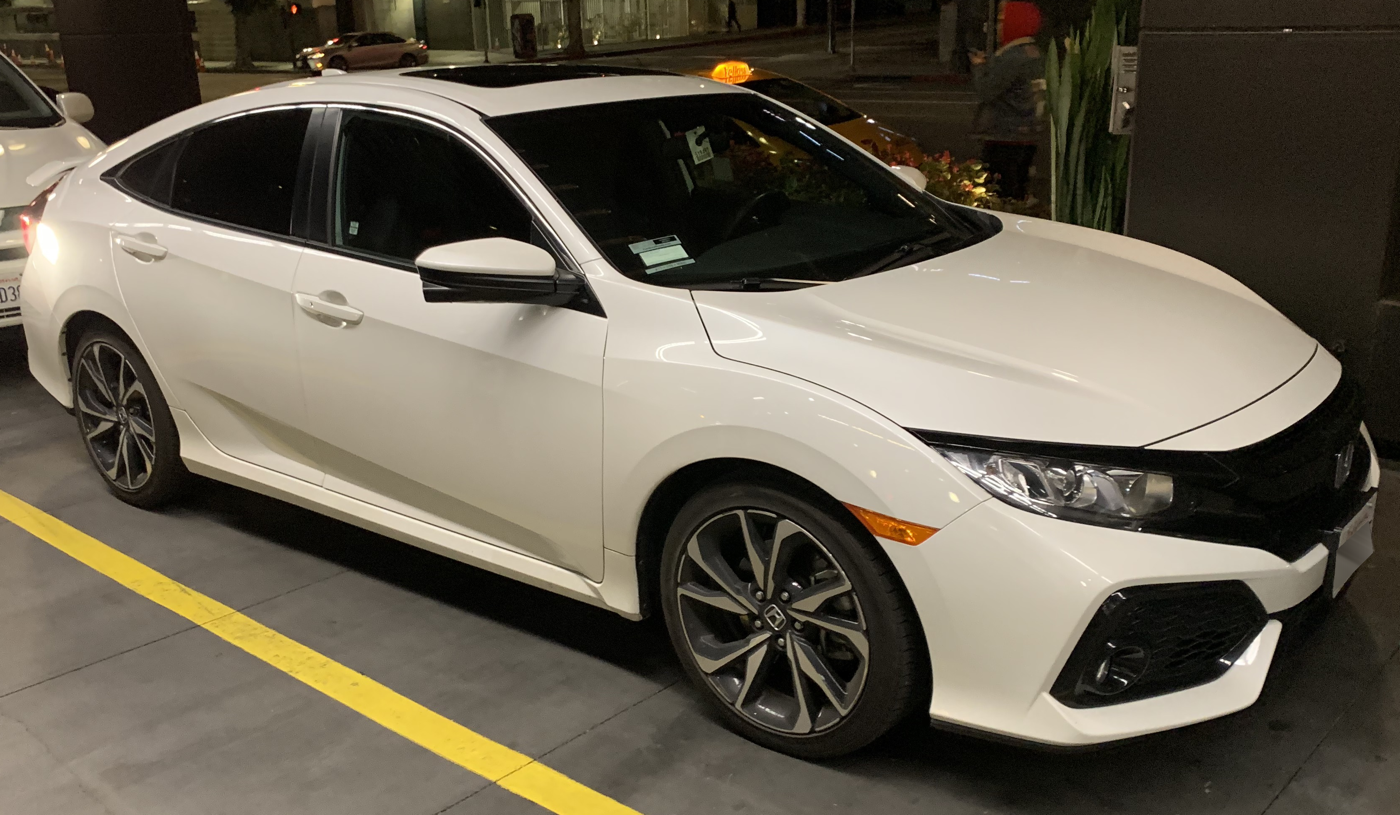 On our recent trip to the L.A. Auto Show, we wanted a spry, powerful, anonymous little car for buzzing around Southern Cali traffic, both downtown and all around the area. The idea appealed to us of a Civic Si with its new turbocharged engine, 6-speed manual and light, tight chassis. After checking the box, “Yes, I’m able to drive a stick shift,” we’re all set.

What do you need in a good L.A. car? With gas prices still well over $3/gallon, your first need in a good L.A. car is good fuel mileage. The Si is rated at 28 city/38 highway by the EPA. It does this without a start/stop system (yes, BMW has one with a manual transmission.), cylinder deactivation or brake regeneration.

In our entire week zooming (Yes, literally zooming; more on that later.) around the L.A. area, including Newport Beach the Convention Center and the airport we only filled the tank once. Premium fuel is recommended (30¢ higher, minimum), but if you won’t be flooring it and racing everywhere you can save the extra and burn regular. We used premium.

Car and Driver recorded 26 miles per gallon during their testing, but Consumer Reports recorded 34… so your mileage may vary!

On a rainy night on the 101, traffic never suddenly stops in the left lane in L.A., does it? When it does, and you’re driving even faster than the prevailing traffic, as one is apt to do, its good to have 12.3-inch vented front discs and ABS. Consumer Reports recorded a 60-to-zero wet stop in an impressive 135 feet. We didn’t measure our wet stop from (ahem) a somewhat higher speed, but the nose on our little Civic Si was still intact when we turned it back in. The brakes did warp a little from the hard braking and will need to be turned, but that is probably simply accumulated wear from L.A. traffic.

Hard stops are straight with no wandering and the car remains completely under control. In regular traffic the brakes are light and easy to modulate.

205. That’s the horsepower from the Civic Si’s 1.5-liter turbocharged 4-cylinder. 192 pound-feet is also underfoot, but not as important in a manual transmission car. The light six-speed manual is a delight and helps spit out acceleration from this small but healthy power-plant. Road and Track returns a 6.3-second zero-to-60 MPH time and Car and Driver achieves the fastest quarter-mile time of 14.8 at 96 MPH.

None of those numbers convey how lively this car handles the streets of L.A. or the California freeways. Unlike a lot of turbocharged engines, this is not a stump puller with no revs. The airflow through this little plant has been tuned to peak at a relatively high 5700 RPM, and it keeps pulling all the way to its 6500 RPM redline.

Two different progressive shift light help you catch the shift perfectly without staring at the tach, just like one of those fancy Lamborghinis. The first one blinks when you approach redline and speeds up right before you need to shift. The second one can be activated through the custom display mode and has colored lights that display progressively starting at 4000 RPM until redline.

Speaking of shifting, all of you are going, “A manual transmission in L.A.?! Are you crazy?” 1. Yes, my insanity has been documented at Tulane Medical Hospital. 2. The clutch and shifter in the Civic Si are so light, direct and straightforward, even after a 10-hour day of standing at the convention it wasn’t a hardship to drive in heavy traffic for an hour. The gates on the 6-speed are very transparent: there’s little chance you dump it into third instead of fifth or vice versa. The clutch’s friction point is very near the top of travel, speeding up shifts and reducing the need for leg flexes. Even reverse is natural to engage, I did it the first time without even looking at the shift pattern. This would also be a natural first car to teach a youngster the love of rowing his own gears.

Many young people will be handed the keys to one of these by unsuspecting parents. That said, the Si has a very controlled limit: it understeers (pushes). It’s .97 G’s of cornering force, as measured by Car and Driver, is lower than true sports cars, but does make the Civic Si safer for young drivers, as it can help them out of trouble, without tempting them to speeds in corners that could have disastrous consequences.  It has quick reflexes and can handle a fast emergency maneuver without over-correcting. Its stability control cannot be fully disabled, unlike the Type R’s. This said, it is unobtrusive most of the time.

It’s very easy to buy a Honda Civic Si: Do you want two doors or four? What color? Then if you want you can add some dealer accessories.

You can’t get a navigation system, but with standard Apple CarPlay and Android Auto, who needs one? You say your mom still uses a flip phone? Then she probably uses a paper map or asks for directions.

Honda LaneWatch™. During daylight this system is a little distracting, takes too long to engage, but does add valuable information. At night, you might as well have someone flashing a strobe light in your face; disable it. In addition, since it comes on every time you use the right turn signal, regardless of whether you are changing lanes (helpful) or making a right turn (not), when we were using Apple CarPlay to navigate L.A. streets, it would override our view of where to turn next while it showed us the mailbox on the sidewalk. Honda has come to the same conclusion, as the latest versions of the CR-V and Accord ditched the LaneWatch for electronic blind spot monitoring.

Radio. Not having a physical volume knob on the unit is not as big a deal as people make out. But, rejoice, for 2019 sees the return of it. If you get a good deal on a 2018, take it, and just use the handy steering wheel controls to adjust the sound system. That said, as CarPlay and Auto catch on, factory infotainment systems will be relegated to secondary status, acting as exterior monitor and mouse. Only their sound quality and reliability will be important. The Si gets good marks here.

The Civic, and by extension the Si, nails every single test the Insurance Institute for Highway Safety can throw at it. Except one. The Civic missed a Top Safety Pick for 2018 due to the poor rating for its headlights. In L.A., where everything is brightly lit, its hardly a pressing problem: we never noticed a lighting deficit.

We did have one serious issue with the lights. When the valet returned our Civic to us before we went out for our late-night dinner, he had turned our headlights off. Hopping in, all we saw was the brightly lit dash and the reflections of our DRL so we happily drove off. It was a few miles later, when trying to engage cruise control that we noticed. Although the gauges and radio light up with the ignition, our steering wheel mounted controls did not, our only clue that we were driving with weak DRLs and no taillights whatsoever. Luckily our score of no cop trouble stayed perfect and we put the headlight switch back on “automatic.”

This isn’t a Lexus or Lincoln. That said, the manually adjustable seats are comfortable, the trim has good workmanship and the interior is quiet at highway speeds (normal highway speeds). Heated front seats, unlikely to be needed in L.A., are standard. At 14.7 cubic feet the trunk is a good bit larger than many similar small cars, including the Civics long-lost cousin the Acura ILX (12.4), MINI Cooper Hardtop 4 Door (13.1), Impreza Sedan (12.3) or a Mazda3 4-Door (12.4).

The Civic is a crazy-looking spaceship of a car. Now that Toyota has calmed the appearance of its Prius down, one can hope Honda will follow suit with the Civic. Your author wouldn’t even consider the sublime Type R because it looks like an escapee of a work-release body shop at a mental institute. That said, the Si is not nearly so bad and Civics are so ubiquitous in L.A. that you could rob a bank in front of the cops and then park across the street eating a sandwich as long as they didn’t get your plate. For some people that might be a bad thing. For them, the booby-hatch/body shop is open late; go get a wing the size of a chest of drawers bolted on.

This is a great car for L.A. It fits in without swallowing truck-loads of money like a new BMW (or even worse, a ten-year-old BMW). It can squirt through holes in traffic, handle speeds on the freeways you shouldn't be doing and sip gas while doing it. Valets won't fight over it, but they also won't slip away with it to show their girlfriend.